Try to find the positions of the ships listed below the puzzle. The numbers on the side of the puzzle reveals how many ship segments can be found in the rows and columns. All remaining fields indicate ’water’. Consider the following rules: The ships are arranged horizontally and vertically. No ship touches another ship at any point, not even diagonally. Here’s a little self-explanatory example: 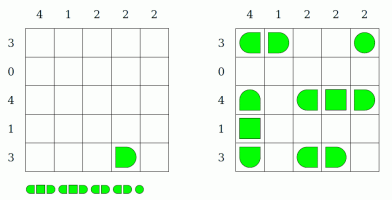 The environment is the central core of the style file. With the optional argument of the environment, you can reset the options with local scope. Here, a blank grid is created that you can fill with ships using other commands.

With the command placeship you can place complete ships in the grid. It expects the specification of the {direction} as horizontal (H) or vertical (V). Furthermore, it requires the starting coordinates {column}{row} and the {length} of the ship.

The command placesegment is used for the placement of ship segments in the grid. In the mandatory argument {ship segment}, you can use the following commands:

The command ship was replaced by the command placesegment. The command is deprecated and should not be used longer. It may still be used, but it is not recommended.

With the command placewater you can place water markers in the grid.

With the command placeisland you can place islands in the grid. The island outlines are created randomly.

The command shipH typesets the horizontal numbers above the grid. It expects a comma-separated list as an argument.

The command shipV typesets the vertical numbers beside the grid. It also expects a comma separated list.

The command shipbox defines the number and size of the ships, which are typeset under the grid.

The command allows you to define your own styles. For example, the style left is defined as follows:

The command provides the counter in textual form to use it for example in definecounterstyle.

With the command titleformat, you can define the format of the title. By default, the definition is as follows:

With the command battleshipsetup you can reset the options with global scope.

The command classicgame typesets a game sheet for playing classic Battleship. It expects a comma separated list with the number and sizes of the ships.

With the command setpuzzlecounter, you can reset the puzzle counter, for example before the solutions.

You can download application examples and their solutions from the project page. The puzzles are originally licensed under CC-BY-NC-SA.

You can also download a game sheet for playing the classic Battleship.